Blue Sky Window Cleaners was originally called Student Window and Wall Cleaners.  The company was started in 1920.  Back in the early years, a majority of the employees were students from Denver University as well as many Denver firemen who cleaned windows on their days off.  When the Denver Seminary opened in 1950, the company started hiring individuals studying to be Pastors.  As the years went on, the company’s reputation for providing a flexible schedule for students grew and they eventually started hiring students from all local colleges and graduate schools.  We still hire a lot of students today!

The pioneer window cleaners were more handy men, Jack-of-All-Trades individuals.  Even though the name was window cleaning, they did whatever someone needed.  It did not matter how off-the-wall the request was.  They did house cleaning, all-types of home maintenance and repairs, painting, landscaping maintenance, floor sanding, finishing and waxing, wall washing, bird control, pest control, snow removal, high rise window cleaning, and many other maintenance services.

Today most of these services are performed almost exclusively performed by individual companies.  Rarely do you see them all done by one company like the years of past.

The original owner designed some of the earliest versions of rope and harness equipment for window cleaning.  In fact, he sold the Student Window and Wall Cleaners to start his own rope and harness manufacturing company.  Some of the early devices were absolutely crazy.  One in particular looked like a weight belt used today, but it had two hooks attached to it.  Essentially you opened the window, straddled the window sill, attached the hooks to the window sill, stepped out onto the side of the building and closed the window pane.  Now you are standing on the side of a building with two hooks holding you up while you cleaned the window.  Could you imagine doing that today? 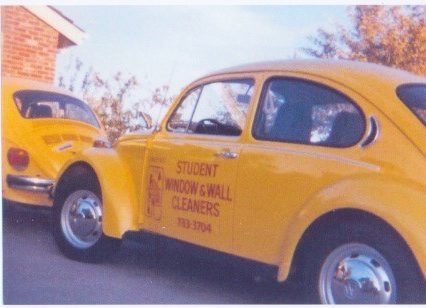 In the 60’s and 70’s the company had a whole fleet of yellow Volkswagen Bugs.  The Bugs were such a great marketing tool for the company because everyone in town knew those bugs.

The second owner, who had originally worked for the company, purchased the company and successfully ran the business for many years.  His son eventually took over and the entire family continued operating the business.  In the 1990’s, the owner decided to sell the window, gutter and wall washing side of the business to two Denver Seminary students who were currently working for him.  He kept the bird control part of the business and successfully operated it until the early 2000’s until he retired.  The two students, who purchased the company after graduating, successfully ran it for many years until their respective churches grew enough to support them and their families.  One of them still runs a church here in Denver.  The other moved to Seattle to take over his father’s church.

My wife and I purchased Blue Sky from the Pastors 14 years ago.  Though the name of the company and technology have changed, we still follow the esteemed traditions set forth by our predecessors.  We love being part of such an amazing, authentic, and historic company.  We love providing a great job for our employees and we are so grateful to all the repeat and new customers that have helped this company be relevant for so many years. It’s not extremely common to have customers who have used you longer than you have been alive.  We still have customers call and ask specifically for the DU and Denver Seminary students.  It’s always such a joy to talk to them.  Even today, at least half our crew has attended the Denver Seminary.  We look forward to carrying on the company values of providing awesome employees to serve our customers in a way that exceeds their expectations. 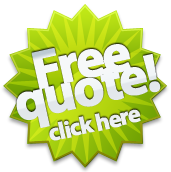